An estimated 71 million people are chronically infected with the hepatitis C virus (HCV) worldwide and each year between 400,000 and 700,000 deaths are attributable to this virus. In its 2016-2021 global hepatitis plan, the WHO defined ambitious strategies to achieve 90% reduction in new HCV cases and 65% decrease in HCV-related mortality by 2030.

Injecting drug is a major driver of HCV spread worldwide and the WHO has clearly identified people who inject drugs (PWID) as a key population to target for HCV screening, prevention and care. It is estimated that 10 million of 16 million PWID across the world are positive for HCV antibody. HCV is often transmitted through nosocomial routes in Africa. However, intravenous drug use has emerged as a new concern especially in East Africa. East Africa is a point of geographical significance and is widely considered the gateway for African narco-trafficking, with 90% of the imported heroin destined for distribution to both continental and global sites.

Since 2013 we have been collaborating with Muhimbili National Hospital, Dar-es-Salaam and set up a cohort of PWID who are infected with HCV.

We are working on simplified diagnostic algorithms to improve HCV screening in this population. We also plan to set up a treatment intervention for hepatitis C in these patients. Currently access to HCV antiviral drugs is very limited in sub-Saharan Africa. 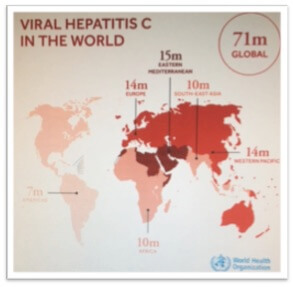